Seagrass meadow is known for its contribution as a habitat, ability to attenuate the waveâ€™s energy and as natural protection for the beach. The coastline of Universiti Malaysia Sabah (UMS) consists of important coral reef and seagrass ecosystems. Seagrass meadow is found at the northern part of the UMS beach at an area known as the Outdoor Development Centre (ODEC) while patchy coral reefs are found at the deeper part of the shoreline. The objectives of this study are to determine the beach profile and sediment characteristics of UMS-ODEC beach during the Southwest and Northeast monsoons and to compare the beach profile at areas where seagrass meadow is present and exposed beach area to the open sea. Beach profiling measurement was done at the three transects placed perpendicular to the UMS-ODEC beach. Transects 1 was with presence of seagrass and transects 2 and 3 were without seagrass.  Sediment samples were taken at each transect for sediment characteristics identification. The assessment was done at an interval of every two month starting from May 2016 to March 2017. Beach profile elevation of UMS-ODEC Beach is higher during the Northeast monsoon than during the Southwest monsoon. It was also identified that large accretion happened at transects 1 and 2 between the month of July 2016 and September 2016 and between the month of January 2017 and March 2017. The erosion process happened at all transects between the month of September 2016 and November 2016 during the peak of the Southwest monsoon and continued to erode between the month of November 2016 and January 2017 during the Northeast monsoon. Sediment characteristics of mean, sorting, skewness at all transects were categorized under fine sand, moderately sorted and coarsely skewed, respectively during the Northeast monsoon and vary sediment characteristics except skewness of at all transects during the southwest monsoon. Based on this one year measurement of beach profile and sediment characteristics, there is no clear impact of the seagrass meadow as a natural coastal protection for the UMS-ODEC beach. 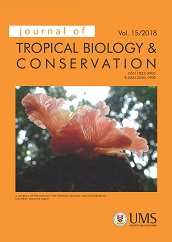